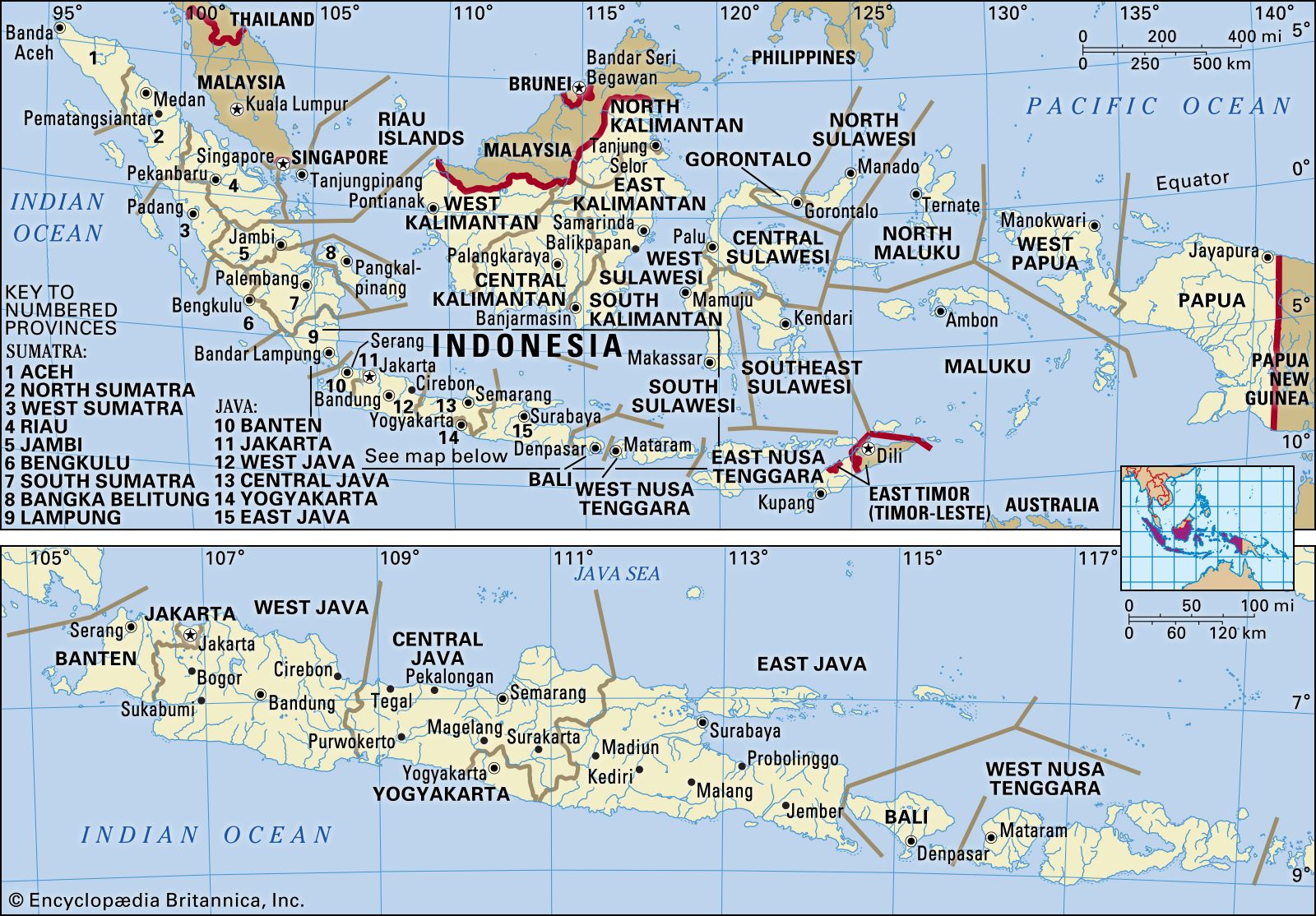 Papua, formerly (1973–2001) Irian Jaya, or (until 1973) Irian Barat, propinsi (or provinsi; province) of Indonesia, spanning roughly the eastern three-fourths of the western half of the island of New Guinea as well as a number of offshore islands—notably, Sorenarwa (Yapen), Yos Sudarso (Dolak), and the Schouten Islands. Papua is bounded by the Pacific Ocean to the north, Papua New Guinea to the east, the Arafura Sea to the south, and Cenderawasih Bay and the Indonesian province of West Papua (Papua Barat) to the west. The provincial capital is Jayapura. Area 122,418 square miles (317,062 square km). Pop. (2010) 2,833,381.

The Maoke Mountains, an extension of the cordillera composing the central highlands of Papua New Guinea, stretch about 400 miles (640 km) east-west across the central part of Papua and rise to an elevation of 16,024 feet (4,884 metres) at Jaya Peak. The summits are heavily forested, except for the highest ones, which consist of glaciated rock. To the north is the east-west valley of the Tariku and Taritatu rivers, tributaries of the northwestward-flowing Mamberamo River. The Van Rees and Gauttier ranges, the latter rising to some 7,450 feet (2,270 metres), separate the east-west valley from the northern coastal lowlands. Extending south of the Maoke Mountains is a wide swampy area drained primarily by the Digul, Pulau, Brazza, Baliem, Lorentz, Momats, Cemara, and Mapi rivers. The high mountain regions are broken by valleys covered with coarse grass, and tropical rainforest vegetation is common. The low-lying areas north of the central mountain range are clothed with dense rainforests. Among the many varieties of trees are palms (sago, coconut, and nipa), sandalwood, ebony, rubber, casuarina, cedar, breadfruit, and mangrove. Orchids and ferns thrive in the rainforests.

Papua lies within the Australian faunal region, which means that its animal life is more similar to that of Australia and New Zealand than it is to that of western Indonesia and the Southeast Asian mainland. Notable mammals include marsupials, such as tree kangaroos and cuscuses; monotremes (egg-laying mammals), including several types of echidnas; and a broad array of bats, terrestrial rats, and water rats. Snakes, crocodiles, frilled lizards, and tortoises are among the common reptiles. Typical birdlife includes cassowaries (a type of flightless bird), birds-of-paradise, megapodes (mound builders), bowerbirds, plumed herons, green pigeons, and lories (a type of parrot).

In the early 21st century, hundreds of indigenous—or Papuan—peoples together accounted for nearly three-fourths of the province’s population. The remainder consisted of immigrants, largely from Celebes (Sulawesi), Java, and the Moluccas. The indigenous groups speak numerous Papuan languages, while Austronesian languages are spoken by most others. The bulk of the population is Christian (primarily Protestant); Muslims make up the largest religious minority. Local religions are practiced by some of the Papuan communities. The areas surrounding the cities of Jayapura and Nabire on the northern coast, Merauke and Timika on the southern coast, and Wamena in central Papua are the most densely populated, largely by immigrants from other parts of Indonesia. Otherwise, the central mountains, the south-central coastal region, and the river basins of the southeast are predominantly indigenous areas. The swampy flatlands of the north are sparsely populated.

Most of the Papua’s people are engaged in agriculture (including forestry and fishing). Rice is the chief food crop, although cassava, sweet potatoes, soybeans, corn (maize), green beans, and peanuts (groundnuts) are also important. Other notable farm products include palm oil, cocoa, and nutmeg. The forests yield timber and copal (varnish resin), while assorted finfish, shrimp, oysters and other shellfish, sea cucumbers, and seaweed are among the products of Papua’s fisheries. Agricultural activities support a small manufacturing sector, the principal products of which include processed foods, lumber, wooden furniture, and other wooden goods.

Although mining employs only a small portion of the population, it is by far the largest contributor to Papua’s economy. One of the world’s biggest deposits of copper and gold ore is located at Tembagapura, in the west-central part of the province. Exploitation of those resources has been under way since the early 1970s, despite disruptions caused by long-term guerrilla fighting in the region. Petroleum is also extracted in the area. Internal transport is supported by a growing number of secondary coastal roads, riverboats, and airways that link the major cities in Papua with those in West Papua and other parts of Indonesia.

For administrative purposes, Papua is divided into more than two dozen kabupaten (regencies) as well as the municipality of Jayapura. Those units are further parceled into distrik (districts), which in turn contain tens to hundreds of kampung (villages) at the lowest administrative level. The chief executive of Papua is the governor.

The first Europeans to sight the island of New Guinea were the Portuguese in 1511, and what is now the Indonesian portion of the island was subsequently visited by Spanish, Dutch, German, and English explorers. The English attempted to found a colony near Manokwari (now in West Papua) in 1793. The Dutch claimed the western half of New Guinea in 1828, but their first permanent administrative posts, at Fakfak (now in West Papua) and Manokwari, were not set up until 1898. Haji Misbach, a Muslim communist, was exiled by the Dutch to western New Guinea in 1924, and three years later about 1,300 communists were imprisoned there after an uprising in Java. The Japanese occupied the northern part of Dutch New Guinea during World War II until Allied forces recaptured Hollandia (now Jayapura) in 1944. The Netherlands regained sovereignty of western New Guinea at the end of the war and retained it after officially recognizing Indonesia’s independence in 1949. In 1962, after protracted negotiations, the region was placed under United Nations administration, and in 1963 it was transferred to Indonesia, with provision that a plebiscite would be held by 1969 to decide its future status.

Opposition to Indonesian rule, led by the Free Papua Movement (Organisasi Papua Merdeka or OPM), erupted almost immediately. The plebiscite took place in 1969, and, though the results were suspect, the area became the Indonesian province of Irian Jaya. The OPM continued to resist Indonesian rule, and violence broke out periodically. In 1999 then president of Indonesia B.J. Habibie divided the area into three provinces: Irian Jaya, Central Irian Jaya, and West Irian Jaya. Largely perceived as a “divide-and-rule” maneuver, the partition met with strong local opposition and consequently was annulled the following year by Habibie’s successor, Abdurrahman Wahid. Wahid not only returned the region to the status of a single province but also granted it a significant degree of autonomy.

In January 2002, just a few months after Megawati Sukarnoputri assumed the presidency, Irian Jaya officially changed its name to Papua. Meanwhile, Megawati resurrected the idea of dividing the province, and in 2003, without consulting the residents of Papua or the local government, the province was split into West Irian Jaya (Irian Jaya Barat) and Papua. An interim governor was appointed for West Irian Jaya, and a legislature was installed the following year. Although the constitutionality of the division of the province was disputed for some years, Papua and West Irian Jaya were officially recognized as separate entities by Megawati’s successor, Susilo Bambang Yudhoyono. Both provinces held direct general elections in 2006, and in 2007 West Irian Jaya became known as West Papua.