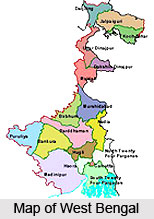 History of West Bengal
Early mention of Bengal can be found in the Mahabharata and in Ptolemy’s geography. Bengal was then a seafaring nation, sending traders to Sri Lanka, Sumatra and Java and being visited by Greeks, Chinese and Persians either by sea or over land. In the third century it was a part of Ashoka‘s empire. In the 4th century AD it was absorbed into the Gupta Empire. From the 13th century it was under Muslim rule, until it came under the British in 1757 after the Battle of Plassey. The British East India Company formed its earliest settlements in Bengal in the first half of the 17th century and later became the capital state in India during the early phase of rule of British government on India.

Geography of West Bengal
West Bengal is on the eastern bottleneck of India. The state has a total area of 88,752 square kilometres. It covers two broad natural regions, the Gangetic plain in the south and the Himalayas in the north. The narrow Terai region separates this region from the plains, which in turn transitions into the Ganges delta towards the south. 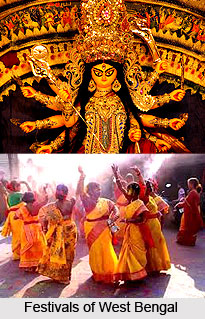 Culture of West Bengal
A great majority of the people in West Bengal are Bengalis. The signature of Bengali art is its delicate touch and requirement of keen observation. India has become familiar with the leather goods of West Bengal and their subtle stitch patterns. Terracotta art, another Bengali creation, is also a perfect example of delicate art now in demand around the world.

Bengali music like the tribal music, baul songs, and the folk music underwent a significant popularity in India. Relatively young compared to most Indian music, Bengali music only began developing significantly 200 years ago. Rabindra Sangeet and Nazrul Geeti fostered this growth. Saraswati Puja, Lakshmi Puja, Kali Puja and Janmashtami are major festivities of Bengal. The most important festival in West Bengal is the Durga Puja. Celebrations last for seven days, and preparations begin months in advance. The Baul tradition is a unique heritage of Bangla folk music, which has also been influenced by regional music traditions. Some of the cultural festivals of West Bengal are Piola Baishakh (the Bengali New Year), Rathayatra, Dolyatra or Basanta-Utsab, Nobanno, Poush Parbon, Christmas, Eid ul-Fitr, Eid ul-Adha and Muharram. 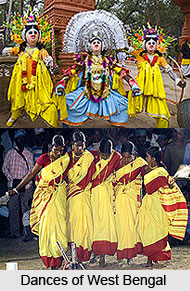 West Bengal schools are run by the state government or by private organizations, including religious institutions. Instruction is mainly in English or Bengali, though Hindi and Urdu are also used. The secondary schools are affiliated with the Council for the Indian School Certificate Examinations, or the West Bengal Board of Secondary-Education. West Bengal has eighteen universities. The University of Calcutta, one of the oldest and largest public universities in India, has more than 200 affiliated colleges. The Bengal Engineering Science University and Jadavpur University are prestigious technical universities. The state has higher education institutes of national importance including the Indian Institute of Technology Kharagpur, the Indian Institute of Management Kolkata, The Saha Institute of Nuclear Physics, the Indian Statistical Institute and the Marine Engineering and Research Institute, University of North Bengal, University of Gour Banga and many other universities in different regions of West Bengal.

West Bengal had more than 1000 published newspapers. Of which 430 were in Bangla. Anandabazar Patrika published from Kolkata with 1,130,167 daily copies, has the largest circulation for a single-edition, regional language newspaper in India. Other major Bengali newspapers are Aajkal, Bartman, Sangbad Pratidin, Ganashakti, The Telegraph, and The Statesman. Apart from these there are hundreds of entertainment and news channels in Bengali. These are ABP Ananda, 24 Ghanta, Star Jalsa and many other channels are aired from Bengal.

Administration in West Bengal
West Bengal is governed through a Parliamentary system of Representative Democracy, a feature the state shares with other Indian states. Universal Suffrage is granted to residents. There are three branches of government. The legislature, the West Bengal Legislative assembly, consists of elected members and special office bearers such as the Speaker and Deputy Speaker that are elected by the members. Assembly meetings are presided over by the Speaker or the Deputy Speaker in the Speaker’s absence. The judiciary is composed of the Calcutta High Court and a system of lower courts.

Economy in West Bengal
Agriculture is the leading occupation in West Bengal. Rice is the state’s principal food crop. Other food crops are maize, pulses, oil seeds, wheat, barley, potatoes and vegetables. Jute is the main cash crop of the region. Tea is also produced commercially in the Northern part of West Bengal. The industries are located in the Kolkata region and the adjacent to the Gangetic plains. 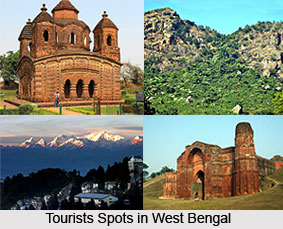 The industries are concentrated in the mineral-rich western highlands, Haldia port region, regions of the Hooghly River Belt. The Durgapur-Asansol Colliery belt is abode of a number of major steel plants. The manufacturing industries playing an important economic role are engineering products, electronics, electrical equipment, steel, leather, cables, textiles, frigates, automobiles, jewellery, railway coaches, and wagons. The Durgapur centre has established a number of industries in the areas of sugar, chemicals tea and fertilisers.

Tourism in West Bengal
West Bengal is a state where major tourists come from different parts of India and over the world. West Bengal is a place where one can find pilgrimage tourist spots; nature tourism spots and the leisure tourism spots. From Victoria Memorial to Adina Mosque, from Kalighat to Jatar Deul, from Joypur forest to the Jaldapara Wildlife Sanctuary, West Bengal offers the local, national and foreign tourists in all the seasons. There are thousands of tourist spots in West Bengal. But the most important are Kolkata, Darjeeling, Siliguri, Bankura District, Birbhum, Malda, Midnapore: Sunderbans, Digha and Mondarmoni.