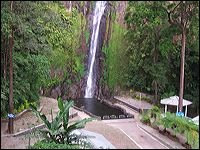 Sedudo Waterfall l ocated at Ngliman, Sawahan district. Reachable from Nganjuk about 30 km. The air is fresh and cool. This location is often visited by many of people especially during Suro, one of months of the Javanese year. An impressive waterfall of more than 100 metres high, SedudoFalls – like many other falls, springs, and wells in Java is believed to be something of a fountain of youth. The district goverment and the public around, always held a traditional ceremony every Suro. According to them, Sedudo Waterfall was used to bath statue in Parna Prahista ceremony, then the water spattered to the body in order to get a safety and eternal youth. The traditional ceremony of taking up Sedudo sacral water as the sign to begin the public bathing is done by 12 girls with long hair and boys. The form this procession is taking a bath together in the pool under Sedudo waterfall, and held every Suro (the first Javanese month). This procession is led by the Regent of Nganjuk and followed by the local visitors, and the tourist who come from the whole Java. After taking a bath, still on the Sedudo area, the visitors are entertained with the traditional art named Jedor.