If you visit no other place on the island than Ubud, you will be amply rewarded, for this is the most Balinese of towns and is so different from all the others.
This is due to The Tjokorde Gde Putra Sukawati, Ubud’s royal prince. Fearing the dilution of Balinese values and attitudes seen elsewhere on the island, he’s done his very best to keep such toxic influences out of Ubud. 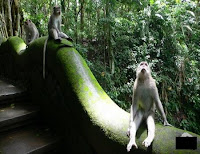 You won’t find billboards here, nor a night-market, cinema, sidewalk sellers, wheeled food stalls, or dodgy cafes, bar and massege parlours. It’s a real breath of fresh air after to the over-the-top “anything goes” commercialism found elsewhere on the island.
Ubud has always been uniquely special. Little more than a village 70 or 80 years ago, nevertheless it was a center of fine art – painting, sculpture, carving and the other decorative arts.

In the 1920’s and 1930’s noted artists from overseas came and visited. Many stayed and influenced local artists. These days Ubud is still known as the island’s artists colony, but it is much more than that.

You’ll find the cream of design here – in paintings and handcratfs, in fashion, in jewellery, glassware, photography, batik, the list goes on. It’s also the acknowledged yoga, meditation and new age center. Ubud is the special town for Elizabeth Gilberth, the author of Eat, Pray, Love get her love. At 32 years old, Gilbert was educated, had a home and a husband, and a successful career as a writer. However, she was unhappy in her marriage and often spent the night crying on her bathroom floor. She separated from her husband and initiated a divorce, which her husband contested. She entered into a relationship with another man, but this relationship did not work out either. While writing an article on yoga vacations in Indonesia, she met a seventh-generation medicine man who told her she would come back and study with him. After finalizing her difficult divorce, she spent the next year traveling around the world. She spent four months in Italy, eating and enjoying life (Eat). She spent four months in India, finding her spirituality (Pray). She ended the year in Bali, Indonesia, looking for “balance” of the two and found love (Love). And this story has produce a film and the is staring Julia Robert. This film is take a picture in Bali, expecially at Ubud.