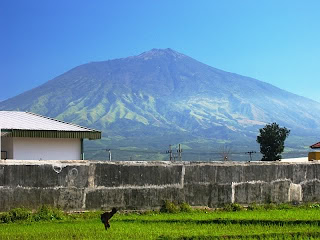 Batu is a city in East Java province, Indonesia. The city is located 15 km west of Malang, in the path of Kediri and Malang, Malang, Jombang. Formerly, It was a part of Malang regency; but in 2001, Batu became an independent city legalized by Act of 11, 2001, when it became a municipal town with its own city mayor and council.  This city is directly border with the District Mojokerto and Pasuruan in the north and the District of Malang to the east, south, and west. This urban area located at an altitude of 680-1200 meters above sea level with temperatures average 15-19 degrees Celsius.
A population of 170,000 people, it mostly consists of Javanese and Madurese ethnics. The town used to be a recreation place for the Dutch colonial officers in the Dutch colonial area (before 1945). A historic colonial-style hotel is the Kartika Wijaya, founded in 1891 by the Sarkies Brothers. Batu has been called Little Switzerland in Java because of the tourist area lied on the cool mountains. In this city you can find lot of tourist attraction such as in Songgoriti you will find  Songgoroto Temple and Ganesha statues and relics of the kingdom Singosari then the resorts which built since the Dutch era.
In the vicinity of Batu, scattering places if interest have so far attracted many visitors due to the distinctive features found in every tourist resort in the area such as, Songgoriti which is famous for its curative thermal spring, while Selecta is naturally famous for its swimming pool, impressive view of fruit market and fresh vegetables as well as flower-stalls along the streetside leading to the bathingside.
The roads, both leading to Batu and the surrounding resorts, are in good condition in which a large number of public transportation always play routes in this area.
Accomodation and its facilities scattering here and there such as star hotel, inns, villas, restaurants, souvenir shops, streetside stalls, play ground and swimming pool are avalaible. This fascinating tourist object of Batu, is approximately 20 km to the Northwest of Malang.
Coming from outside the Indonesian Archipelago, you have three main options to get Malang.