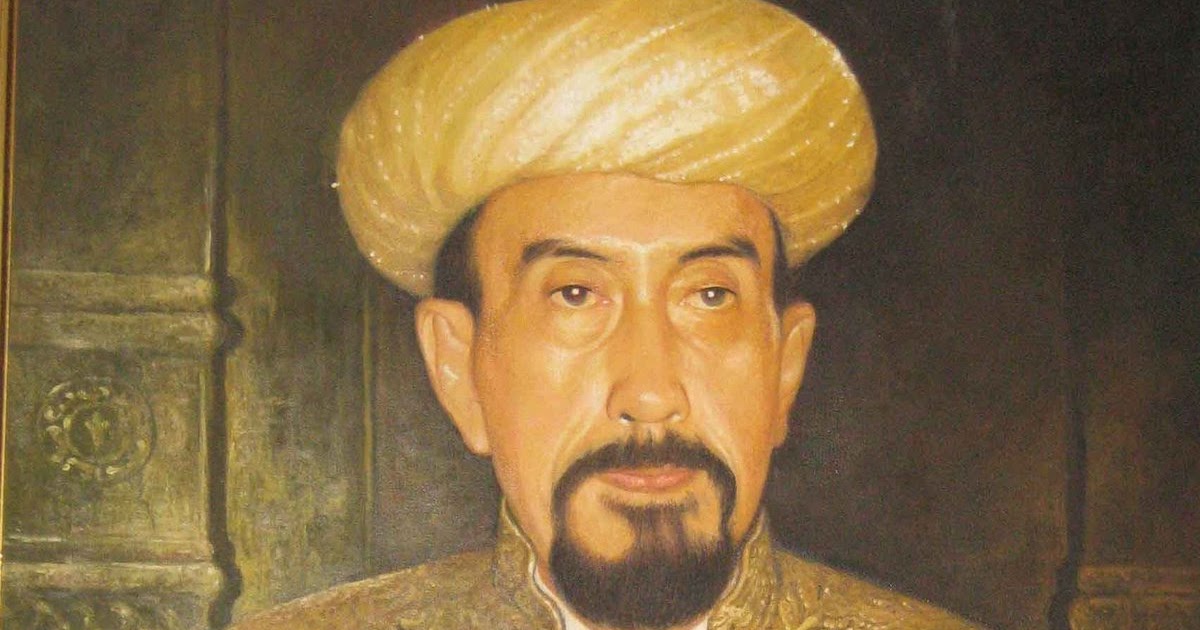 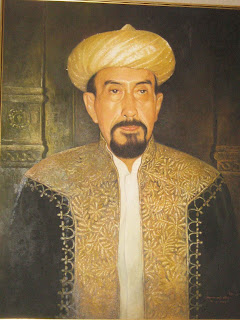 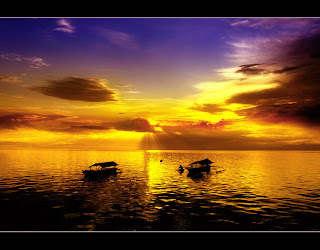 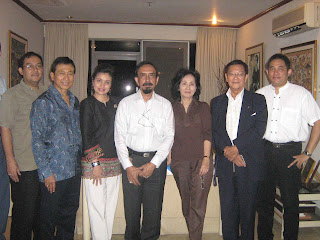 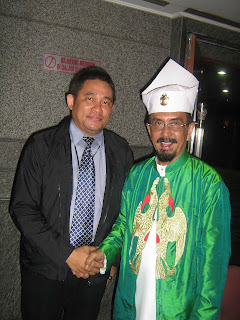 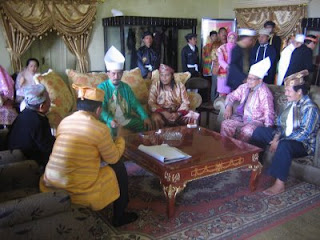 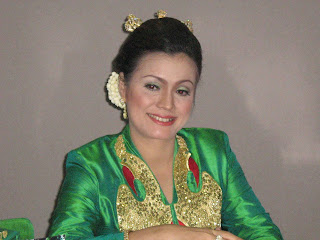 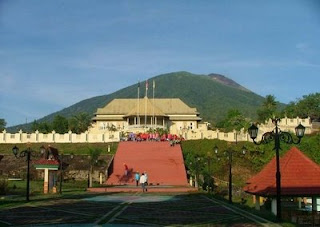 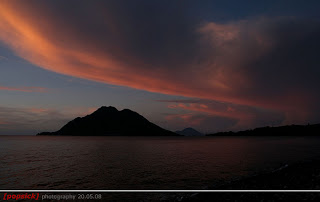 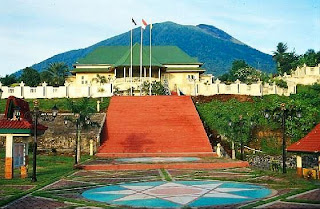 Keraton Kesultanan Ternate, tempat tinggal Golongan Jou
TernateTernate is an island and town in the Maluku Islands (Moluccas) of eastern Indonesia, located off the west coast of the larger island of Halmahera. Like its neighbouring island, Tidore, Ternate is a visually dramatic cone-shaped island. The islands are ancient Islamic sultanates with a long history of bitter rivalry. The islands were the world’s single major producer of cloves, upon which their sultans became among the wealthiest and most powerful sultans in the Indonesian region. In the precolonial era, Ternate was the dominant political and economic power over most of the “Spice Islands” of Maluku. Today, Ternate is the largest town in the province of North Maluku, within which the island constitutes a municipality (kotamadya).Ternate IslandTernate is dominated by the volcanic Mount Gamalama (1715 m). The volcano erupts regularly, covering the island with volcanic dust. Major past eruptions of Gamalama include 1673, when a large, but undetermined number of people were killed, and 1772, when about twenty inhabitants died. The largest recent eruption of Gamalama was in September 1980, when 30,000 of the islands 56,000 residents were forced to temporarily flee to nearby Tidore. The island now has an area of 76 square kilometres (29 square miles) and held a population estimated at 145,143 in July 2003.

Ternate CityGreater Ternate City (Indonesian: Kota Ternate) spreads 10 kilometres from the airport to Bastiong port. The commercial centre stretches 2 kilometres from the bus terminal near Fort Oranye to Ahmad Yani Port where Pelni ships arrive.The current Sultan’s Palace, built in 1796, is now partly a museum. The large Fort Oranye, built by the Dutch in 1607 on top of an undated Malay version, was the home of the Dutch East Indies Company until it moved to Batavia (Jakarta) around 1619.

HistoryPre-colonial historyTernate and neighbouring Tidore were the world’s single major producer of cloves upon which their rulers became among the wealthiest and most powerful sultans in the Indonesian region. Much of their wealth, however, was wasted fighting each other. Up until the Dutch completed the colonization of Maluku in the 19th century, the sultans of Ternate ruled empires that claimed at least nominal influence as far as Ambon, Sulawesi and Papua.The peak of its power came near the end of the sixteenth century, under Sultan Baabullah, when it had influence over most of the eastern part of Sulawesi, the Ambon and Seram area, and parts of Papua. It frequently engaged in fierce competition for control of its periphery with the nearby sultanate of Tidore. According to historian Leonard Andaya, Ternate’s “dualistic” rivalry with Tidore is a dominant theme in the early history of the Maluku Islands.

In part as a result of its trade-dependent culture, Ternate was one of the earliest places in the region to which Islam spread, probably coming from Java in the late 15th century. Initially, the faith was restricted to Ternate’s small ruling family, and spread only slowly to the rest of the population.

EuropeansThe first Europeans to stay on Ternate were part of the Portuguese expedition of Francisco Serrão out of Malacca, which was shipwrecked near Seram and rescued by local residents. Sultan Abu Lais of Ternate heard of their stranding, and, seeing a chance to ally himself with a powerful foreign nation, he brought them to Ternate in 1512. The Portuguese were permitted to build a fort on the island, construction of which began in 1522, but relations between the Ternateans and Portuguese were strained from the start.

An outpost far from Europe generally only attracted the most desperate and avaricious, such that the generally poor behaviour of the Portuguese combined with feeble attempts at Christianisation, strained relations with Ternate’s Muslim ruler.In 1535 King Tabariji was deposed and sent to Goa by the Portuguese. He converted to Christianity and changed his name to Dom Manuel. After being declared innocent of the charges against him he was sent back to reassume his throne however he died en route in Malacca in 1545. He had though bequeathed the island of Ambon to his Portuguese godfather Jordão de Freitas. Following the murder of Sultan Hairun at the hands of the Portuguese, the Ternateans expelled the Portuguese in 1575 after a five-year siege. Ambon became the new centre for Portuguese activities in Maluku. European power in the region was weak and Ternate became an expanding, fiercely Islamic and anti-Portuguese state under the rule of Sultan Baab Ullah (r. 1570 – 1583) and his son Sultan Said.

Spanish forces captured the former Portuguese fort from the Ternatese in 1606, deported the Ternate Sultan and his entourage to Manila. In 1607 the Dutch came back in Ternate where with the help of Ternateans built a fort in Malayo. The island was divided between the two powers: the Spaniards were allied with Tidore and the Dutch with their Ternaten allies. For the Ternaten rulers, the Dutch were a useful, if not particularly welcome, presence that gave them military advantages against Tidore and the Spanish. Particularly under Sultan Hamzah (r. 1627-1648), Ternate expanded its territory and strengthened its control over the periphery. Dutch influence over the kingdom was limited, though Hamzah and his son and successor, Sultan Mandar Syah (r. 1648-1675) did concede some regions to the Dutch East India Company (VOC) in exchange for help controlling rebellions there. The Spaniards abandoned Ternate and Tidore in 1663. In the 18th century Ternate was the site of a VOC governorship, which attempted to control all trade in the northern Moluccas.

By the 19th century, the spice trade had declined substantially. Hence the region was less central to the Netherlands colonial state, but the Dutch maintained a presence in the region in order to prevent another colonial power from occupying it. After the VOC was nationalised by the Dutch government in 1800, Ternate became part of the Government of the Moluccas (Gouvernement der Molukken). Ternate was occupied by British forces in 1810 before being returned to Dutch control in 1817. In 1824 became the capital of a residency (administrative region) covering Halmahera, the entire west coast of New Guinea, and the central east coast of Sulawesi. By 1867 all of Dutch-occupied New Guinea had been added to the residency, but then its region was gradually transferred to Ambon (Amboina)

before being dissolved into that residency in 1922.

20th centuryLike the rest of Indonesia, Ternate was occupied by Japanese forces during World War II; eastern Indonesia was governed by the Navy. After Japan surrendered in August 1945 and Indonesia declared independence, Ternate was reoccupied in early November 1945 by Allied forces intending to return Indonesia to Dutch control. It became part of Maluku province when Indonesia became independent.

In 1999 and 2000, Ternate suffered from the same religious violence between Muslims and Christians that wracked many parts of Maluku, particularly Ambon and Halmahera.