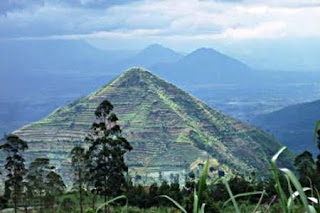 Just a note, Andi continued, the Pyramids of Giza pyramid is known as the oldest and largest of the three pyramids at Giza necropolis. It is believed that the pyramid was built as a tomb for Fourth dynasty Egyptian pharaoh, Khufu and constructed over more than 20 years and is estimated to take place in the years around 2560 BC.

In the near future, the Team will conduct Ancient catastrophic exposure to the public about these findings. Not only about the findings of the pyramid on the Main Page, the team presented the findings will also be special in the region Trowulan, Stone Jaya, some menhirs locations in Sumatra and others.

Pyramid Found in Yogyakarta and Kediri. Meanwhile on the other place, Team Katastropika Ancient Disaster Studies established by the Special Staff of President Field of Disaster and Social Assistance, discovered pyramid in Kadiri and Yogyakarta.

“Bumps in the District Berbah Ijo Temple, Sleman, Yogyakarta Special Region and the temple on the Mount Klothok, Kediri, East Java, was strongly suspected that prehistoric art is the building of the building resembles a temple or pyramid,” said Erick Ridzky of Ancient Katastropika Disaster Study Team.

Having previously Katastropika Ancient Disaster Study Team recommends several locations in West Java to be a cultural heritage, this time the team proposed location in the area of ​​East Java and Yogyakarta is to receive similar treatment.

According to Erick, Tim Katastropika Ancient Disaster Studies have found there are three types of hazard and disaster layers of different materials, which also has made the coating indicating the three civilizations at different times pula.Dia argues, the main question in the current research team is visiting Trowulan , how could the ancient buildings of the experience accumulation, damage and even buried. There is a dominant natural role of these relics.

“Done with research at Gunung Putri, Kaledong Mountain, and Mount Haruman in West Java, we stepped in Trowulan, complex kingdom of Majapahit, East Java and find the process of accumulation by the disaster in some period of time,” says Erick.

“The results of analysis of rocks and then coupled with the image of the Global Positioning System (GPS / satellite navigation systems), approaches the geological structure of aerial photographs be explored there is a line of trenches and the results are astounding,” said Erick.

He said the ditch was a consistent basis, either from GPS analysis and coring results found that the first brick layer at a depth of 0.8 meters and 2.5 meters in depth. After a depth of 2.5 meters berangkal always found a layer of gravel that can not be penetrated by the auger.

“It takes time indeed, because of the methodological approach trencing, coral, test radar, geoelectric and so conducted strictly in order to achieve optimal data,” he said.