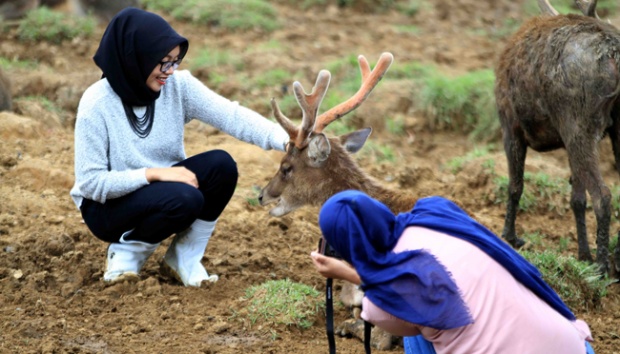 TEMPO.CO, Jakarta – Muslim tourists are a potential segment of the global tourism where in 2017, a total of 131 Muslim tourist arrivals were recorded globally, or up from 121 million in 2016.

It is estimated that by 2020, the total number of Muslim tourist arrivals across the world is expected to reach 156 million per annum, a figure that has the potential to advance the tourism of a country.

As a predominantly Muslim country, with a population of 265 million, Indonesia, therefore, is eager to attract Muslim tourists by creating halal tourism programs.

“Next year, our target is to attract five million halal tourism visitors, or up 42 percent from that of this year, at around 3.5 million. The five-million target is 25 percent of the total foreign tourist arrival target set at 20 million in 2019,” Yahya remarked, at the launch of Indonesia Muslim Travel Index (IMTI) 2019 at the Soesilo Soedarman Hall, Sapta Pesona Building, Ministry of Tourism (Kemenpar) office, on Friday (Dec. 7).

For this, the Ministry of Tourism works with Crescentrating Mastercard to launch the IMTI program to rank the most tourist-friendly halal destinations in Indonesia, with the criteria specified as used by the Mastercard-Crescent Global Muslim Travel Index (GMTI) that uses the ACES criteria (Access , Communications, Environment, and Services).

Mastercard Indonesia Director Tommy Singgih said that Indonesia has consistently tried to improve its position at GMTI. “In 2015, it was ranked sixth in the world, in 2017, it rose to the third position, and in 2018, it was ranked second along with the United Arab Emirates,” Singgih said.

This consistency continues in an effort to reach the first rank.

On that occasion, Yahya launched a halal tourism target for 2019, which is to achieve sustainable growth and winning the first rank as the most friendly tourism destination for world Muslim tourists in the version of the Global Muslim Travel Index (GMTI).

Yahya explained that the high growth of Indonesian halal tourism is very necessary to convince business people of the halal tourism business in the country, which has 3S of interest: the market size is wide, the sustainable growth is high, and the profit spread is large.

“So far, we always lose to competitors from neighboring countries, especially from their size and growth,” Yahya remarked.

Yahya explained that Indonesia is targeting to become the world`s best halal tourist destination 2019. “Next year, we want to be ranked first among tourism destinations and become the most friendly country to world Muslim tourists in the GMTI version. At the moment, we are ranked second along with the United Arab Emirates, while Malaysia is ranked first,” Yahya elaborated.

He added that the rise of Indonesia to the first rank would make it easier for the country to seize the global halal tourism market, which is projected to reach US$220 billion by 2020.

Fazal Bahardeen of Crescent Rating & Halal Trip remarked that Indonesia has a great opportunity to realize it.

“Seeing the beauty of its nature and its rich culture, tourism offers a great growth opportunity for Indonesia. With its position as the largest Muslim country in the world, Indonesia has a core infrastructure and environment that can meet the needs of Muslim tourists,” he noted.

President Joko Widodo (Jokowi), since the onset of his government, has set a gradual increase of foreign tourist arrivals from 9.4 million in 2014 to 20 million in 2019.

This year, the government must work all out to reach its target of 17 million foreign tourist arrivals and its target of 20 million arrivals next year.

Until October this year, some 1.29 million tourists had visited Indonesia, up 11.24 percent from 1.16 million in the same month last year, according to the Central Board of Statistics (BPS).