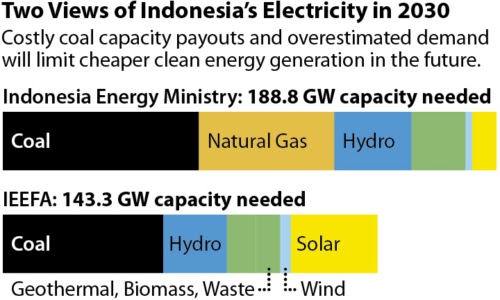 Halting planned expansion of coal power generation in Java-Bali could save the Indonesian Government USD$16.2 billion in unnecessary expenditure, according to a new report by the Institute for Energy Economics and Financial Analysis (IEEFA).

By contrast, a greater focus on renewable energy would likely result in multi-billion dollar savings.

“Indonesia’s rapid coal power expansion plan locks the country into decades of paying for power it isn’t using. It’s literally money for nothing,” said the report author, Yulanda Chung, an IEEFA energy finance consultant. “Capacity payment is used in the name of energy security, but simple changes can be made today that will save the Indonesian government billions of dollars.” 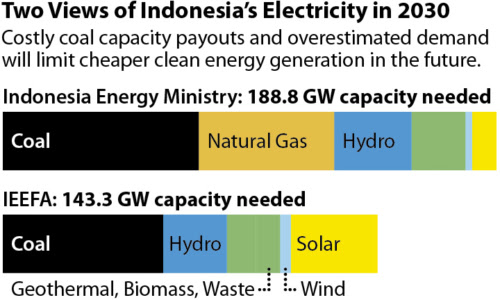 Aiming to attract power producers, PLN is offering 25-year power-purchase agreements (PPAs) by guaranteeing payment for all electricity produced, even if it is not actually used by consumers. In aggregate, PLN will pay an estimated USD $76 billion through 25-year PPAs.

The problem is most acute in Java-Bali, where IEEFA calculates current capacity, supplemented by renewable energy, is already sufficient to cover energy needs until 2026.

“There is no need to build new coal plants in Java-Bali when those that exist today are running at just over half-capacity,” said Chung. “Rushing into new deals will lock in 25 years of paying for over 5GW of coal power supply which will remain idle.”

A further consequence of the country’s long-term gamble on coal is that it mitigates against the uptake of cheap renewable energy.

The levelized cost of electricity (LCOE) for solar in Indonesia is estimated at USD 17 cents/kWh in 2016. IEEFA conservatively forecasts solar PV becoming grid competitive at around USD 8 cents/kWh in 2021 in line with rapidly falling costs.

“Renewable energy is already cheaper than coal in multiple markets around the world,” Chung said. “Changes Indonesia can make today to its energy plan would see it benefit from this opportunity and avoid the fate of locking itself in to billions in excess expenditure on high cost coal.”

conducts research and analyses on financial and economic issues related to energy and the environment. The Institute’s mission is to accelerate the transition to a diverse, sustainable and profitable energy economy.