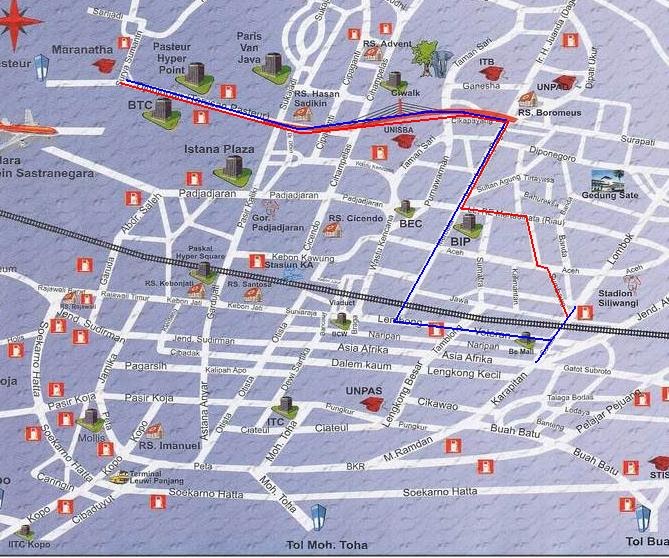 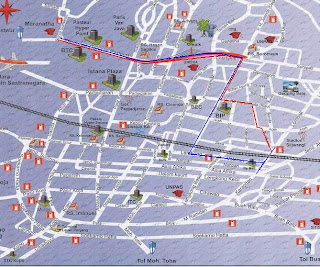 We’re gladly present yau with a travel guide book which provide you with into about travel places in Bandung and other things that will surely draw your interest about this flower city.

In 1895 the first big building was built in Bandung located in the center of the city.

The building is called Gedung Merdeka. At the beginning,this ordinary building was provided for European who spent their leisure time in Bandung . Every weekend or holidays the plantation area surrounding mountainous area in west Java usually went down to the city for vacation. In the night, art performances were presented in the building, followed by gla dinner and other luxurious entertainments. This building was one of the most extravagant buildings in Bandung.

At the first time , the building was called Socitet Concordia ( SC) and then being renovated in 1920 and 1928 so that it looked like nowdays profile. The renovation was designed by two Ducth architects , Van Gallen Last and CP. Wolf Schoemaker. They were arcitect professors at Technische Hoogesschool( at present called ITB ). The first president of Indonesia , Mr Soekarno had been once lectured by them when he was registered as a student.

Concordia Building was the most extravagant building; it was covered by Italian marble.

This building was taken over by the government when Indonesia took its independence from the Dutch and Soekarno renamed it Gedung Merdeka. The name was inaugurated when Asia Africa Conference took place in Bandung in 1955.

Your Bandung visitation has not yet been fulfilled until you walk along the Braga Sreet. The street landscape cutting across north to south the city center is a living museum with heritge buildings ornamented with ancient architectural style such as classic romantic, art deco, Indo – European, neo classic, mixed style and modern arsitect makes you tossed to the past, commemorating last decades.

Do you know that Braga originally was taken from sundanese language “ngabaraga “ meant being stylist or showing up . It was used for the first time in 1810 but popularized by Tonil Braga in 1887 , after that it became more popular . The popularity of Braga was not only for Indonesian but it also sread overseas as the place showing up to date life style. Since then it was called “ Paris Van Java “.

Braga which was really beautiful, before having modernized into Out Holland architectural style, was dusty during the dry season and muddy during the rainy season . the sreet was only crossed by pedati (horse cart ) which brought agricultural product to the coffee warehouse called Koffie Pakhuis. Because of that, Braga sreet was called Karrenweg or Pedatiweg.

Along Braga Sreet you can see antique shops, book stores, even the biggest painting center. As the painting center, Braga Street looked more artistic and beautiful with vatios paintings hang in front of the stores.

This strategic location is easily reachable from the following tourism spots :

In this area there are two historical caves , the Durch Cave built during 1941 to 1942. The durch Cave used to be a Bengkok Hidro Power Electricity Generator while the japanesse Cave was contructed for defence objective after the Nederlands Indies Civil Government surrended to the Japanesse army. The Indonesian forced labor ( also known as romusha ) contructed this cave.

A 10 meters waterfall located side by side to the ancient Thai inscription site could be seen as a united forest ecosystem and local villages near Cikapundung river is unity in diversity of curug Dago natural tourism complexs.

Gedung sate is awarded as one of the most beautiful buildings can be compared to Merdeka palace or called The white house of Bandung . Gedung Sate was built in 1920 and until now it has been used as the Government central of West Java province.

Gedung Ste is identical with its architecture having tusuk sate ornament on its central tower, and has become the landmark of Bandung. This Landmark is not only famous among West Java people but also Indonesian people.

Gedung Sate has 4 floors. The first floor is reception hall which sometimes is used for Sundanesse musical performances when ceremony or official visit held. The second floor is the west nd east halls connected by a corridor.

To reach this beautiful building yau can use public transportation or personal one. Before you conduct a visit and get inside, you have to get the guardian ‘s permit by submitting your ID card. Be nice and don’t disturb the officers because this building is used for the government office during the weekdays.

As an artery street, Jl Ir . H. Djuanda or is well known as Jl . Dago has been filled up by pedestrians especially ones visiting shoping center or factory outlets along this street.

Jl. Dago ornamented by European style profiles, proper top the concept,as it was designed as a garden city. In the past , Jl. Dago was provided to be an elite resident during The ducth colonialism era because it offered fresh air and nature beauty.

Nowdays , Jl. Dago has been transformed rapidly into a business center and a comportable hang out place for youth.

Jl. Dago is still well organized and big trees along the street are still preserved to shade the street environment at noon and also complemented with sidewak for pedeistrian walking along this street.

The temperature reaches 7 – 29 0C and its humidity is 45 – 95 %.Tnagkuban Perahu is located 29 km northen from Bandung or 13 km from Lembang towards Subang regency.

At Kawah Ratu region , visitors can climb up to the Geology Station, a volcano monitoring station at the hill , or go down to Kawah Domas which actively releases sulfur fume. Walking down Kawah Domas would be exhausted but would give memorable experience. There is a little path connecting Kawah Domas to the main street.

Maribaya is a waterfall that is ussully used for relaxation , having talk with family, and people enjoy its natural beauty. It is situated at Lembang , 5 kms eastern from Lembang town or 22 kms from downtown Bandung. It is 1000 m above sea level and covers about 5,5 hectares. Maribaya temperature is about 10 up to 200C . This cool area provides mineral hot spring having 20 to 400 C.

Many tourist facilities are available in this area such as cool & hot water pools, hot water bath tub, horse back riding, restaurant and motel, and for hand give plenty cactus and fresh vegetable are ready to be carried out. Maribaya is very suitable to be a place for having good time with family.

Cikole is a 4,88 ha camp ground . It is situated 1300 m away from Tangkuban Perahu main gate alongside Lemabng – Subang road. This camping ground is very amazing because there are a lot of things to learn such as nature , volcano, and especially its tropical forest environment.

Cikole is also used as a combt zone simulation like paintball game. Some visitors come to take part in war simulaion.The simulation consist of some attraction such s reaching flag fighting, martial combat, and releasing hostage

Enjoy beautiful starlight while learning astronomy in here, it is one of the education tourist area in bandung, locating in Lembang highland nd remains to be one of the biggest observatoriums in The south east asia.

Heaven of shopping, is a nickmane given to bandung. It is strengthened when you observed the shopping enchantment long cihampelas street. This street fenced by many store which re well known as the biggest jeans center in bandung . Are you interested in hunting relly ? just visit this street

Good quality does not have to be expensive. It’s a slogan if you shop cibaduyut area.Price and model of the lather shoes are very competitive,There are hundred shoes store in this area,so you will have a broad alternative to buy shoes

Palalayangan river become the best choise of rafting activity in bandung. Stable water during the year, beautiful lanscape anf near enough from downtown becoming added value of this river