A mountain in Majalengka in Indonesia’s West Java is home to a bizarre ritual involving a marriage ceremony for rocks. The Rock Marriage Cultural Festival has established itself as a cornerstone of the region’s rapidly growing creative scene, ushering in a newfound appreciation for nature among locals.

The name of the festival implies a mix between rocks and mysticism, but it’s much more than that. Locals have shaped the event into a fabulous display of multidisciplinary arts dedicated to environmental conservation. The yearly event is organised independently by Kirik Nguyuh, a local creative collective, alongside residents of Girimukti village. Kirik Nguyuh has been helping young Majalengkans develop their talents in various fields since 2012. 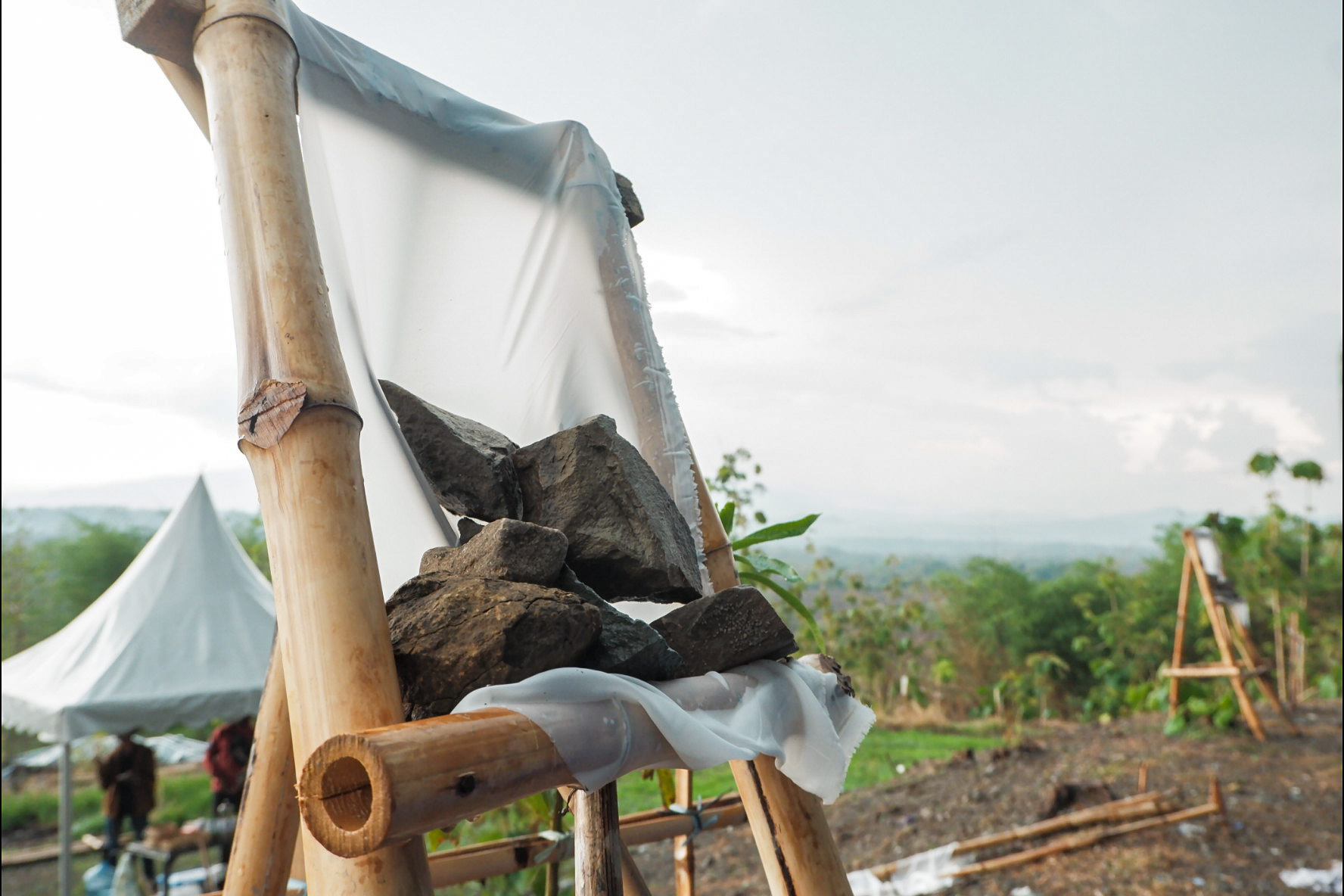 A rock installation at the festival.

A bamboo orchestra signified the beginning of the “wedding” procession. During the ceremony, visitors took turns assembling rocks from their respective regions in a line. A group of traditional dancers glided onto the platform, officiating the union of the rocks.

“We apply the phrase ‘Bhineka Tunggal Ika’ (unity in diversity) to these rocks; they’re all different, but united,” said Baron Famousa, founder of Kirik Nguyuh, adding that the ceremony is meant to offer Indonesians a friendly way to come together regardless of ideology. He believes rocks should be seen as more than just hard objects; they should be appreciated for the various geologic processes they went through before finally becoming rocks.

The rocks put on display represented man’s exploration of nature. A poster for the event advertised rock dances, rock masks, rock music, rock souvenirs, and rock climbing. In addition to various performances, the event also saw the launch of an environmental initiative to plant trees on Mount Tilu.

“When God created Bandung, he was smiling. But when he created Majalengka, he was in a hurry. We’re rich with natural resources, but they’re all raw,” Famousa said, pointing to the cliff. “It must be processed first.” 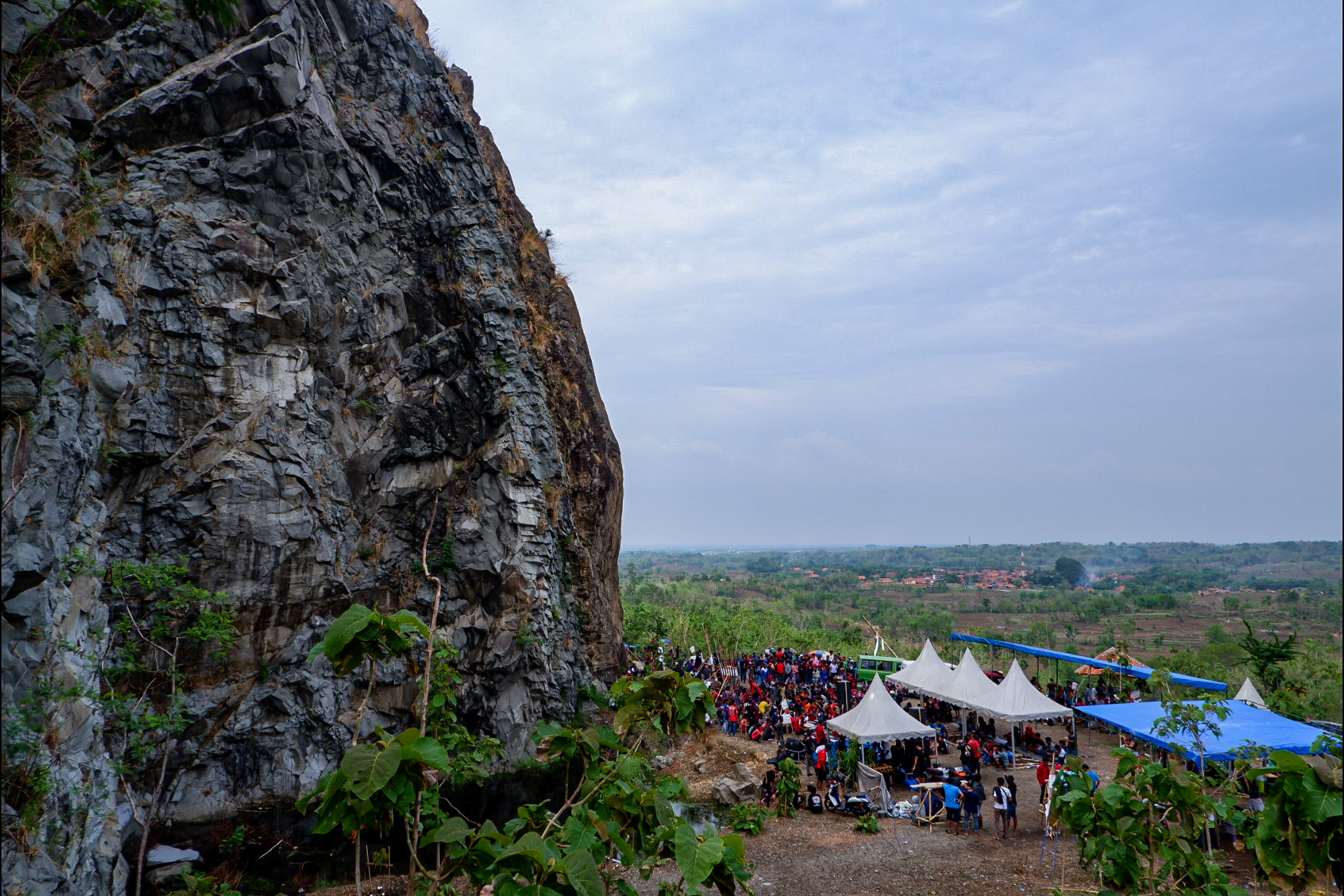 One of the festival’s main attractions is the Kyai Sorawatu, gamelan instruments made of slices of stone from Girimukti village. The musical instrument, an integral part of Indonesian culture, is usually crafted from brass. Kirik Nguyuh began working on the project in 2017 with the help of local ethnomusicologist Abah Asep Nata.

“I’m using volcanic rocks from Iceland, so hopefully there is a geological relationship between these rocks and Mount Tilu’s rocks,” he told VICE.

Simon explained that rocks have untapped musical potential worth exploring.

“We need to work with geologists, because rocks are extremely complex. I’ve been listening to their melodies without any manipulation whatsoever,” he said. 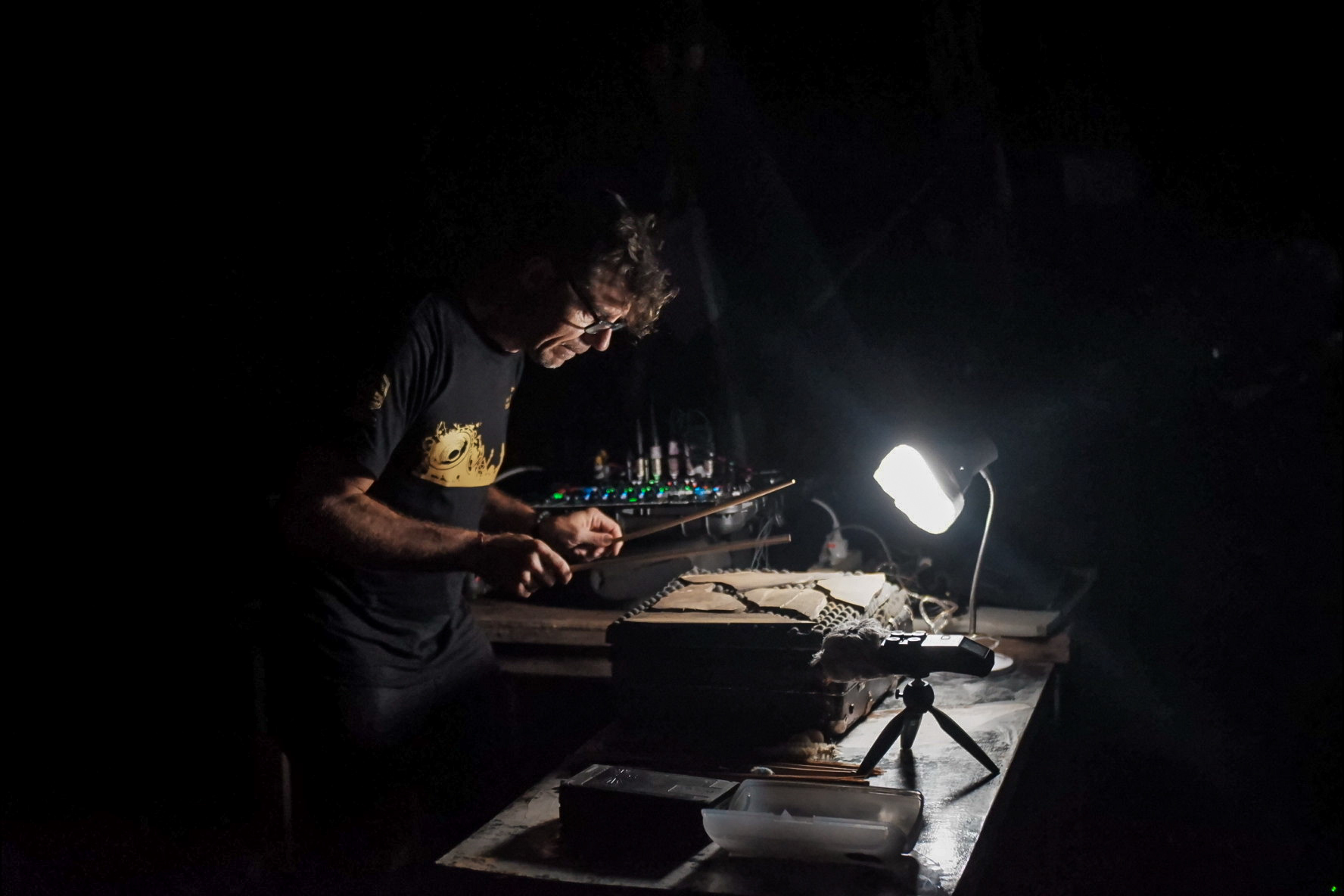 Under the last full moon of 2019, the mountain’s eerie and mysterious charm was in full swing. The grassroots organisation and flexible nature lent the festival an intimate atmosphere. The event, which coincided with International Mountain Day, also offered free rock climbing classes with the local Avonturir Climbing Club (ACC).

“This helps us understand that this place belongs to all of us; it’s for us all to enjoy, but we have to conserve it together, too,” Daniel, head of the ACC, told VICE.

The festival also treated visitors to an ancient Majalengkan dance known as Sintren, which depicts the struggle and transformation of a trapped woman. 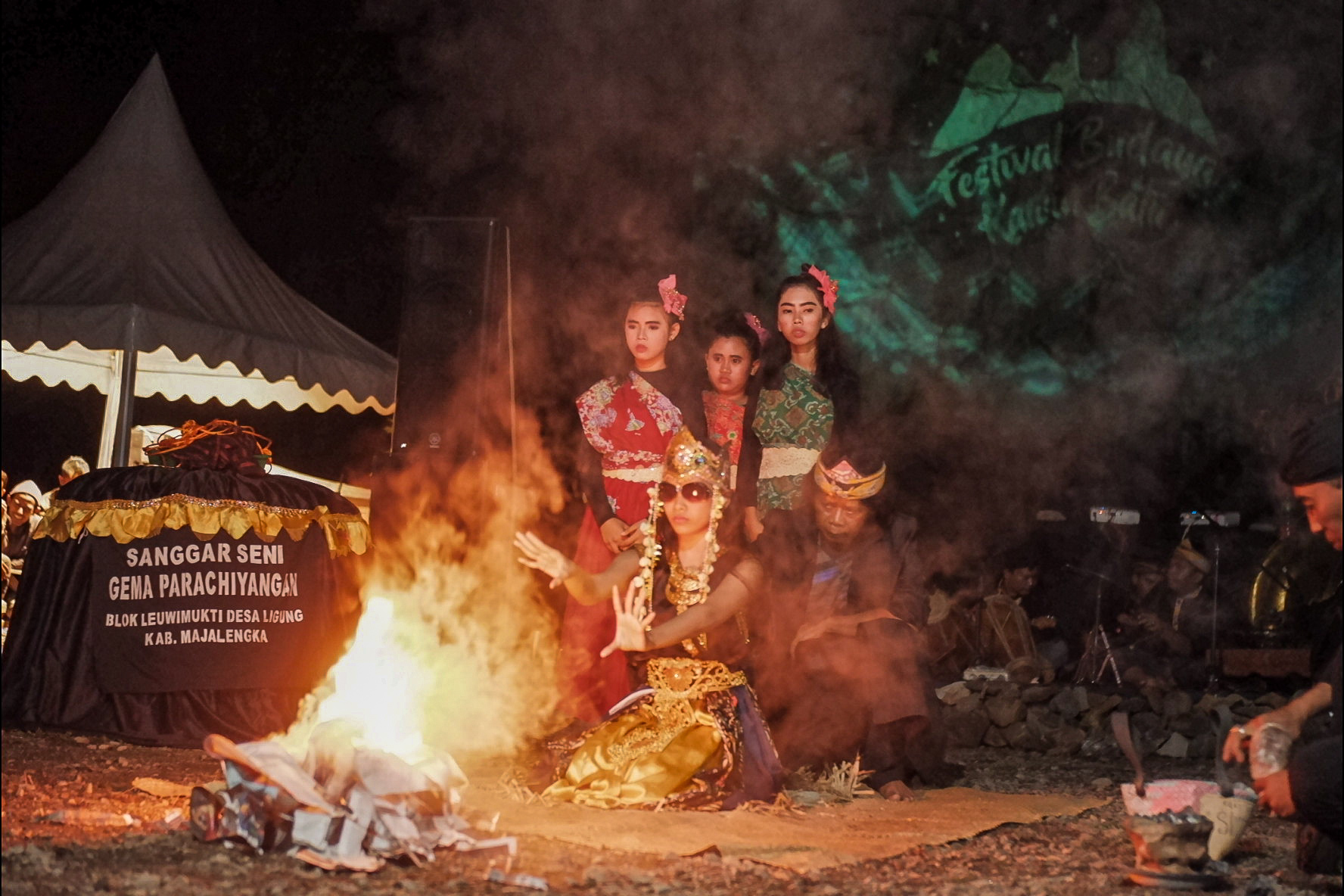 Many locals have come to see Mount Tilu’s massive andesite formations as a collective monument, but the location has also become a hotspot for merchants. Now that Kirik Nguyuh is empowering the local community, the site can be put to good use.

Just three years after the first Rock Marriage Cultural Festival, rumours that the region will be developed for tourism are now worrying local villagers.

“It’s not that I’m against this development. What’s important is that locals first establish and understand their identity,” Famousa said.

While the first day of festivities was reserved for more solemn occasions, the second day was a riot. Hundreds of young people gathered near the cliff in preparation for a string of bands that were set to rock the evening.

In a lively scene, Bands Radioska, Lair, and Substreet riled up the sea of teenagers with neon-dyed hair and mohawks passing around bottles of cheap liquor. 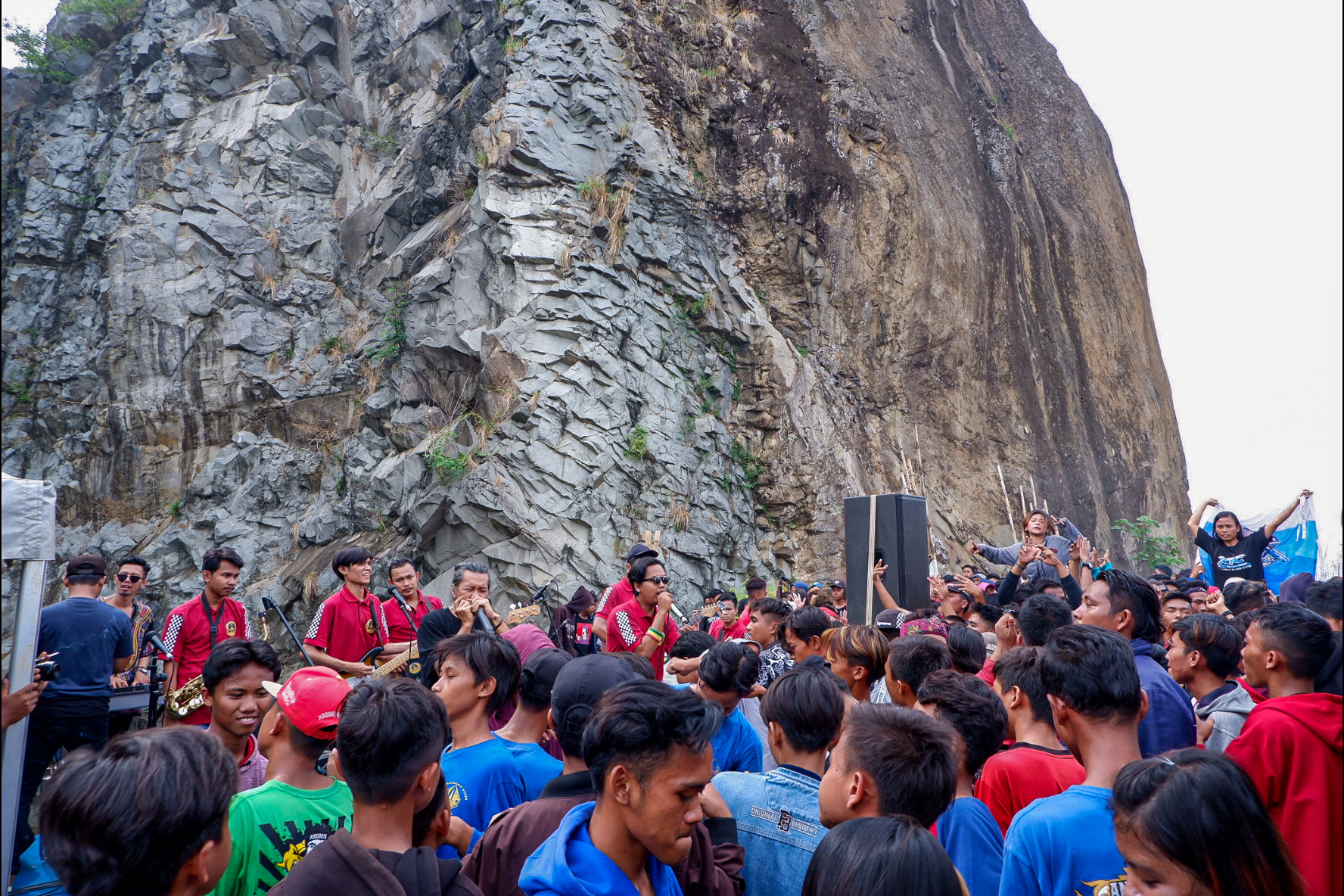 In recent years, dozens of independent art communities have been popping up across Majalengka. Together, they host small creative and educational festivals, earning the region recognition for its arts.

Before taking the stage, Berz shared his overall impression of the festival.

“The magical thing is that a substance as hard as rock can soften people’s hearts.”