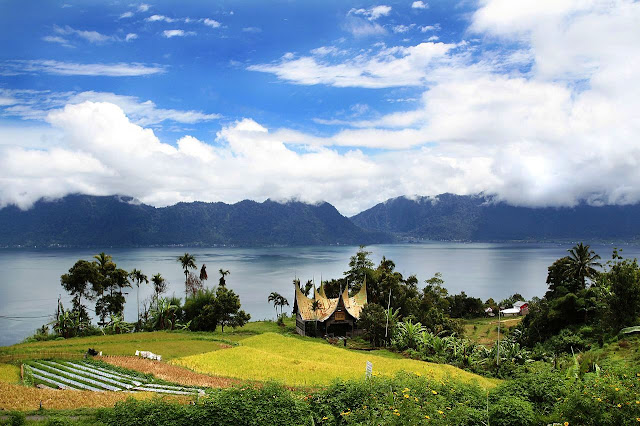 The Indonesian province of West Sumatra continues to promote its diverse cultural and natural attractions in order to boost tourism in the province.

Some of the popular natural attractions include the Twin Lakes in Solok District, Harau Valley in Limahpulu Kota District, and Lake Maninjau in Agam District, which serves as one of the leading tourist destination in West Sumatra.

Agam district government has recorded the number of foreign tourists visiting Lake Maninjau to be quite high, reaching 1 thousand people per month.

“The foreign tourists admitted that they visit Lake Maninjau to enjoy its natural beauty and enchanting panorama,” Syatria stated.

Lake Manjijau, which was formed as a result of a volcanic eruption of Mount Sitinjau that occurred approximately 52 thousand years ago, is one of the top tourist destinations in West Sumatra.

“Besides enjoying the beauty of Lake Maninjau, most of the foreign tourists also take their time to visit the Buya Hamka Museum located beside the lake,” Syatria added.

Inaugurated on Nov 11, 2001, the Buya Hamka Museum stores a collection of photographs, a collection of sticks, and a number of books by Hamka. This museum seems to be a guardian for maintaining Islamic values in the area around Lake Maninjau.

In addition to the Lake Maninjau, other tourist attractions frequently visited by tourists from Japan, South Korea, the Netherlands, France and others, include the Rafflesia Flower Garden in Palupuh sub-district.

Rafflesia Arnoldii only becomes visible when its plump buds emerge through the bark of its host and develop into the large, fleshy flowers, which are pollinated by carrion-flies.

It is a species of flowering plant of the parasitic genus Rafflesia, which is noted for producing the largest individual flower on earth in Sumatra Island.

Every year, the natural beauty of West Sumatra, with its green landscapes, continues to attract both foreign and domestic tourists to the province.

The province also has the potential to develop forest tourism in places like Anai Valley, which can be promoted as a natural tourism destination in West Sumatra.

The Anai Valley Nature Reserve has a dense tropical forest, which is home to a diverse species of flora and fauna. Therefore, it is one of the top tourist destinations in West Sumatra.

The valley also has three waterfalls, a river, and a lake with clear blue waters for the tourists to enjoy.

Situated near the road connecting Padang and Bukitinggi cities, Anai Valley is one of the top tourist destinations in West Sumatra. Since the Dutch colonial era, the valley has been a nature conservation area, which is spread over 221 hectares.

Hence, the local government has improved the supporting infrastructure there in order for visitors to engage in sports tourism activities.

Tourists visiting the area can swim in the river and the lake, bathe under the waterfalls, or go hiking.

According to the governor of West Sumatra, the local government would also focus on promoting and developing the cultural sites of Minangkabau ethnic community, as part of its efforts to promote tourism in West Sumatra.

The cultural sites of Minangkabau in the areas of Siguntur Kingdo in Dharmasraya district and Minangkabau village in Balai Baliki also have immense potential to attract domestic and foreign tourists.

In addition, the natural tourism attractions in the province still need to be developed, especially those that are popular among the tourists.

Therefore, other tourism attractions in the region should be integrated with Minangkabau, which has the potential to attract tourists from all over the world.

The promotion and management of tourism in the area must continue to be optimized in order to reach its full potential.

According to the governor, the West Sumatra provincial government is committed to promoting the regional tourism industry through various efforts.

Meanwhile, the West Sumatra Cultural and Tourism office had declared Bukittinggi city, covering the districts of Agam, Tanah Datar, Pasaman, and Pasaman Barat, as a tourism development center in the province.

The West Sumatra Cultural and Tourism office head has saidthe decision was in line with the governments master plan on regional tourism development in West Sumatra.

Bukittinggi will also serve as a tourism promotion center for Agam, Lima-Puluh Kota, Tanah Datar, and Pasaman, which offer many natural and cultural tourist attractions.(Antara)